Located at 3751 Prospect Avenue, the Sarah Benedict House is listed in the National Register of Historic Places and is part of the Upper Prospect Avenue Historic District.

Its asymmetrical massing, hip roof and detailed masonry work exemplify this rare local example of the brick Queen Anne Style – as do its irregular slate shingling and the tiled frieze between the first and second stories. Unfortunately, the identity of the home’s architect is unknown.

Built in 1883 for Sarah Rathbone Benedict, widow of Cleveland Herald publisher George A. Benedict, the house is one of the few remaining survivors of a bygone era in Cleveland’s rich history. From 1860 until about 1915, Upper Prospect Avenue was second only to “Millionaires’ Row” on Euclid Avenue, which is one block to the north and once dubbed as “the most beautiful street in America.” 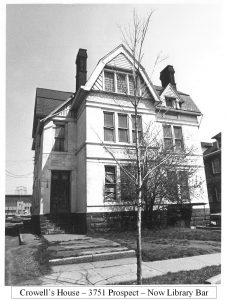 While Euclid Avenue housed the mansions of Cleveland’s wealthiest movers and shakers, the once fashionable Upper Prospect area housed the families of the affluent upper middle class – attorneys, doctors, publishers and businessmen. When the Benedict House was constructed, it joined the line of handsome single-family homes, elegant apartment buildings, churches and row houses on the street. Widowed in 1876, Sarah Benedict lived in the home from its construction until shortly before her death in 1902 at the age of 87. As a prominent Clevelander, she was an integral part of the city’s vibrant social, religious and philanthropic scene.

After her death, the Benedict House existed for many years as a single-family residence. As the Upper Prospect neighborhood transitioned during the early 20th century to a center for Cleveland’s automobile retail sales and other commercial uses, the property served as a boarding house, office building and for light manufacturing. It later became “The Library,” a popular bar for students at nearby Cleveland State University. Until its recent renovation by the Cleveland Restoration Society, the Benedict House stood vacant.

From Library to Restoration Society 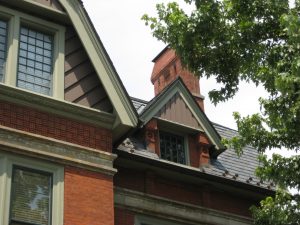 When the Cleveland Restoration Society received the Benedict House, its condition had severely deteriorated to the point that most thought it should be demolished. CRS, with the help of Gaede Serne Architects and the R.W. Clark Company, restored the structure by giving it a new slate roof, cleaning and repairing the masonry and refinishing the interior.

With a $1.175 million budget, the building was carefully restored and rehabilitated in accordance with nationally accepted preservation standards and practices. Volunteers reconstructed the front porch, restored windows, and installed an elevator and new electrical, plumbing, heating and air conditioning systems. They also stripped, stained and varnished interior woodwork, repaired plaster walls, refinished floors, and reproduced missing fixtures and wallpapers to further reflect the authenticity of the period. 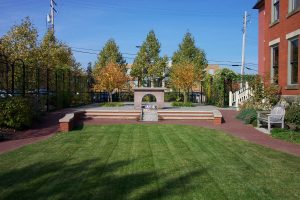 Once the infrastructure of its interior was restored, Benedict House space was sensitively adapted for office use. CRS revamped the formal rooms of the first floor to serve as meeting space for its staff and to host functions. The second floor bedrooms (and one tiled bathroom) were reconfigured to serve as staff offices. The third floor also was renovated into office space (now leased by the Cleveland Neighborhood Development Coalition and Live CLEVELAND!). The once dark and dingy Victorian basement is now office space. In June 2003, CRS opened a public garden adjacent to the house to honor the many volunteers who contributed their time and talents to the home’s restoration.