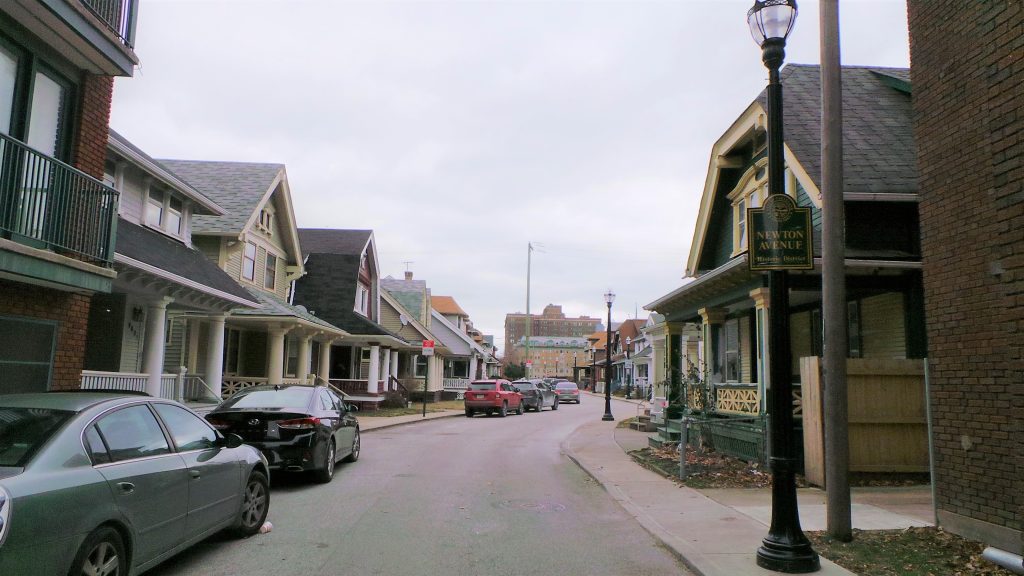 Drive down Newton Avenue and right away you will understand why this special street is landmarked both locally by the City of Cleveland and listed in the National Register of Historic Places. The block is lined with bungalows which are decorated with architectural features pulling from Colonial and Classical Revival designs that are often found on larger, high-style homes. The effect is charming, the homes are well-kept, and the cohesive design of the block makes one appreciate this gem of a street. Jerry Maddox was the person behind the effort to nominate Newton Avenue to the National Register of Historic Places in 1988, and likely the local designation as a Cleveland Historic District that same year.

Jerry acquired Newton Avenue houses because he deeply appreciated their architectural significance, and he wanted to ensure their survival. He was very worried that Newton Avenue would be consumed by institutional expansion. The houses on Newton Avenue were constructed between 1910 and 1923, developed by the Marquard companies who became well-known for their designs of small homes with details found in larger and more expensive homes. These Marquard homes have many wonderful interior features such as solid wood doors with varying designs and decorative trims; wood windows with divided lights in different patterns such as diamonds and ovals; and leaded glass windows, some clear and some with color. Interior features include elaborate wood trim, ceiling beams, paneling, built-in cupboards with leaded glass window and doors, and fireplace alcoves with built-in benches.

Owning these historic homes is an important new step for Cleveland Restoration Society. Since 1999, we have owned our headquarters building, the historic Sarah Benedict House on Prospect Avenue E.  Now, we add to our property management portfolio these eight historic homes. It is our overall goal to honor the character of the street, the long term residents, and the architectural heritage of the houses themselves. By keeping rents affordable for existing tenants, we are doing our part to make a socially-responsible investment in Cleveland. We expect that these homes will return value to the organization while it expands our capacity to preserve Cleveland’s heritage.